In the universal GUI opening (a lot of) documents can make the navigation panel cluttered and even push the menu out of sight: 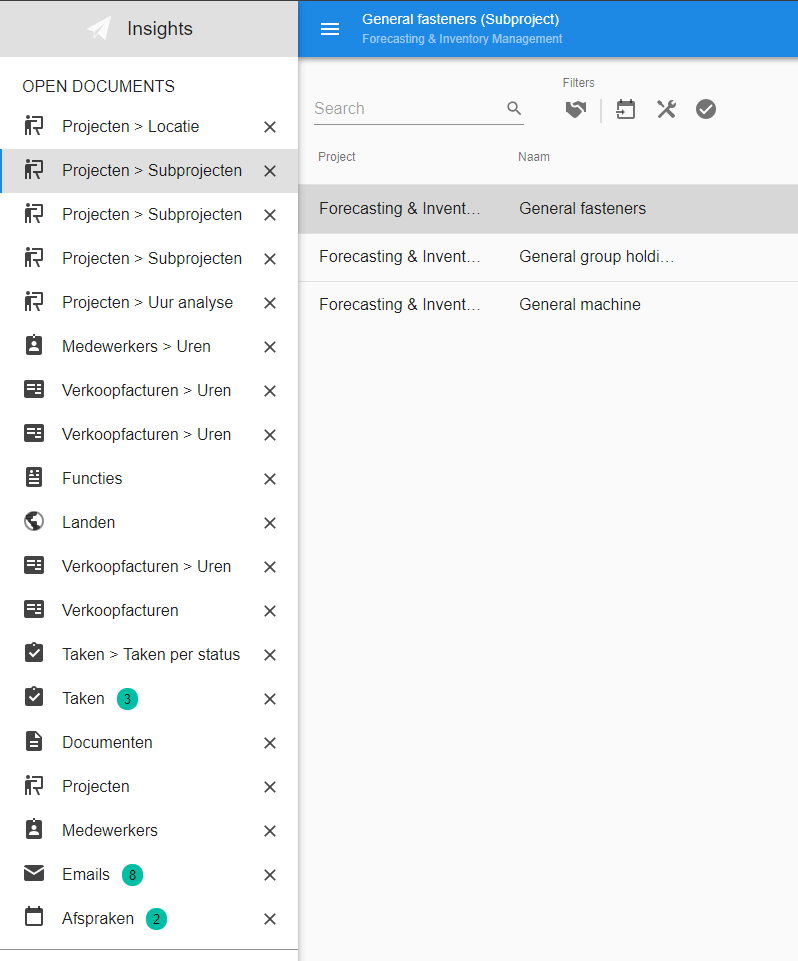 Some suggestions to improve this:
Another suggestion:

Thank you for your suggestions. That's a lot of open documents!

A few notes as we've delved into this before with our UI/UX experts.

The shared scrollbar between the open documents and the menu is intended to help usability when using a mobile device. We don't want the user user to feel like he's scrolling in the 'wrong' part of the menu or that he has to aim for the lower scroll region. The treshhold where a scrollbar would be introduced for open documents would also be a bit arbitrary.

Our UI/UX experts have prototyped several options for displaying the breadcrumb for a document in the open documents. Your suggestion for a tooltip was the conclusion here as well. This is planned to be developed soon. An excerpt from the design documentation: 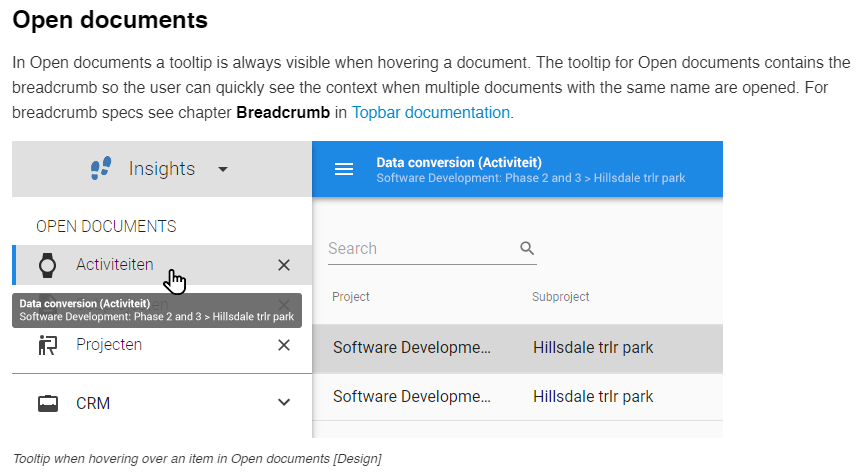 Start objects are planned to be implemented as pinned documents just like you described. This is a bit further down the road as we have a lot of features that have more priority.
J

Thanks for your reply. Good to hear you allready considered some of my suggestions. Your arguments are fair and I see the callenge ;-)

Your suggestion to allow the user to collapse the open documents in one node can become quit restless I think, because opening a menu-item again probably expands the full list in one go, so I should consider a grouping of open documents in seperate nodes like the menu-tree itself. And thinking a bit further along that line....

Did you also consider grouping the open documents inside the menu-structure itself?

Yes, we did consider grouping the opened documents themselves as well. The problem with this we identified was that users are generally very aware of the order in which documents are opened.

The moment we start grouping the opened documents, we let go of the absolute order in which the documents were opened. The full list is deemed important because of that.

It's a bit of an arbitrary decision for now, I know. It will be interesting to see how this plays out when users start working with this GUI in production environments.

We will continuously monitor and gauge the reaction of both users and developers to features like this and adjust accordingly.
A

Good to see that breadcrumb information in the tooltip is there already!

Having the ability to collapse the Open Documents sounds like added value to me too. Is that still in the pipeline? What updates can we expect related to this backlog item (and when)?

Collapsible open documents is on the backlog, but has not yet been assigned a planned release yet. We are focusing on some of the core features of Universal first.

We are also looking into the option of hiding the open documents altogether in the menu and providing a different way for users to navigate between opened documents.