Hello everyone, we have a new Universal Development Update for you! This past time we've been working on showing you if Universal is saving or cancelling, added the combo control, added executing tasks that have no (visible) parameters and improvement lots of styling.

We've made several improvements to edit mode this past sprint:

First off, the save button is always enabled when saving is allowed. Universal previously always made sure everything was up-to-date before allowing users to save. This meant that when you changed the value of a field, you had to click away from the field to indicate you were done with your changes, Universal then did some checks and finally the save button would be enabled. Now we let you press the save button at any time and wait to perform the save until everything is fine and dandy.

This is usually only apparent when you have a very slow internet connection.

The same concept has also been implemented for cancelling. When you press cancel and before the record has been successfully cancelled, the cancel button animates to indicate that a cancel is happening. The save button is also disabled because it's not possible to save cancelled changes. The form fields are also disabled because any change you make would be immediately discarded. It looks like this:

We recently implemented a 'starts with' suggestion control for lookups. But sometimes you just want to pick an item rather than search for it. For that we created a lookup combo control. It loads all values, rather than just the top eight. You also can't type to search for a value. 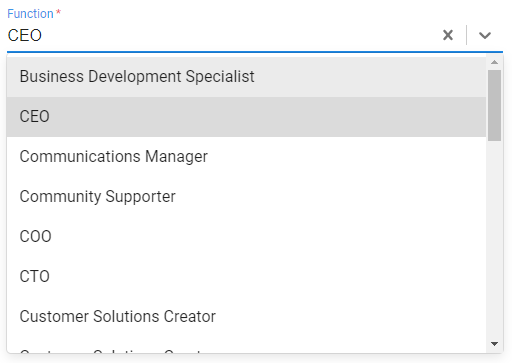 The first version of tasks is here. For now we execute tasks that have no (visible) parameters. After this we'll be laying the groundwork to execute tasks with parameters (think showing a popup with a form to enter your data) We'll also visually indicate when a task cannot be executed for the current row.

Executing a task without parameters

We laid the groundwork to execute layouts in non-edit mode when navigating rows in the grid / cardlist. For the next version we'll be working on actually using the layout in the form and the action bar.

Like before, we've added 41 more unit test cases for our components, controls and the fetching of data.