+6
The previous article showed an overview of the Next Generation Thinkwise Platform. In this article, we’ll zoom in a bit more on the Indicium Application Tier and explain our vision for Indicium’s architecture and its key features and properties.

The image below shows an approximation of our architectural vision for the Indicium application tier.

The architecture of the Indicium application tier.

Due to the increasing demand of interconnectivity between applications, one of the major goals of Indicium is the ability to integrate it in other application landscapes and vice versa. The previous article already illustrated Indicium’s role as an integration hub. This article will explain how this goal will be achieved.

The API exposed by Indicium is based on several industry-leading standards, such as REST and OData. This will make the API as accessible to external developers as it can be, without the need for a large amount of documentation and support.

The Mobile user interface and the old C# service tier communicated in XML, adhering to the SOAP protocol. XML by itself is quite verbose, requiring all column values for all records to be wrapped inside XML-elements with both a start-tag and a nearly identical end-tag. The SOAP protocol further aggravates this issue by wrapping entire responses in SOAP envelopes with various attributes.

Indicium, on the other hand, communicates with clients in plain JSON, which requires at least 40% less data than the C# service tier to transmit the same information to the client. Furthermore, JavaScript-based user interfaces, such as the Mobile user interface and the new Universal user interface, can process JSON much faster than XML. After all, JSON means JavaScript Object Notation. 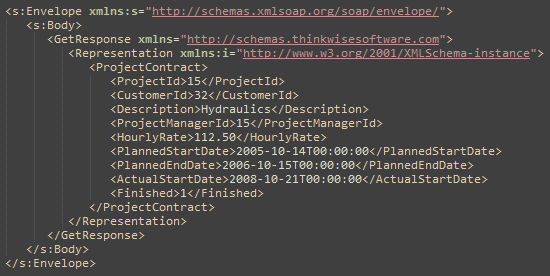 The C# service tier’s XML response for one record. 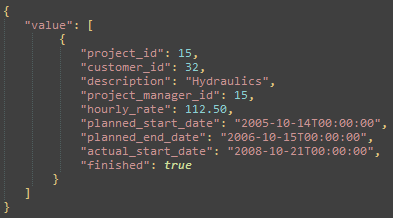 The Indicium application tier runs on ASP.NET Core MVC 6, Microsoft’s latest and most performant web application framework. ASP.NET Core is a redesign of the old ASP.NET framework with the intention of making the framework much leaner to increase request throughput. On top of that, it can run on .NET Core, which is not only much faster than the .NET Framework, but also capable of running on Linux and Mac OS servers.

These points make the ASP.NET Core framework significantly faster than the C# service tier’s WCF Framework and the Web user interface’s ASP.NET framework and allow Indicium’s core services to operate on non-Windows servers. Some features remain limited to Windows though, so please double-check if your application can run on a non-Windows platform.
The performance difference between ASP.NET Core and ASP.NET is illustrated by the image below. These results do not directly translate to Indicium due to the lack of complexity in this testing scenario, but it does give an indication that ASP.NET Core is quite a bit faster than ASP.NET. 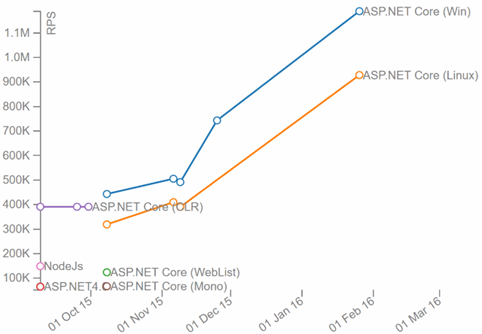 The Indicium application tier uses the ADO.NET framework for all its data access needs. The Web user interface also uses ADO.NET, so there’s no significant difference in performance there. However, the old C# service tier uses the Entity Framework for data access, which is a lot slower than ADO.NET due to all the extra work it does to support features that we don’t use. The Entity Framework also restricted our ability to optimize the queries used to retrieve data due to the limited influence on the query generation process. 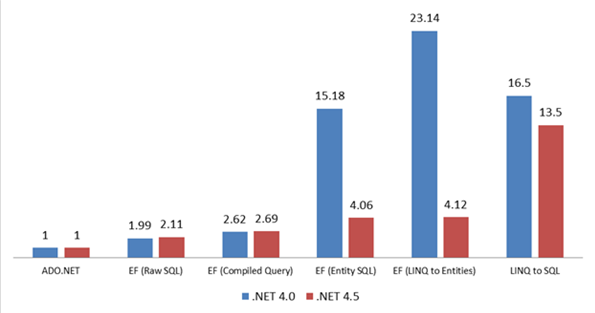 Moving away from two-tier architectures

Another cornerstone of the Indicium application tier is security. Of course, security has always been a priority for our software, but the new architecture enables us to provide more authentication and authorization options. Furthermore, because Indicium will be a mandatory layer between the user interface and the database server, all existing and future authentication and authorization options will be immediately available to all user interface platforms.

An important security aspect of Indicium is that it never connects to the database server with the credentials of the user that makes the request. All data access will be performed by the pool user after checking if the user making the request is allowed to perform the requested action. This approach has two advantages. Most importantly, this means that it’s not necessary to have an account for each user on the database server, allowing you to keep all your user and permission management contained within IAM. The second advantage is that only one connection will be opened per database due to the combination of connection pooling and having only one user accessing the database.

Indicium already enforces select, insert, update and delete permissions, including mandatory prefilters on select, update and delete actions. With this, row-level authorization is a possibility for all platforms with the new Universal user interface that connects to Indicium. We will expand on this in the upcoming months by integrating defaults and layouts in Indicium and only sending the visible columns to the clients. This would also make column-level and cell-level authorization a reality.

With the Indicium Application tier, we aim to greatly improve our ability to scale applications. The reason for this is the increasing importance of cloud platforms, such as Microsoft Azure, and the fact that only scalable applications can utilize the power of these cloud platforms effectively.

When talking about the scalability of applications, it’s always important to distinguish between horizontal scaling and vertical scaling. Horizontal scaling means adding more servers which are running the same application and introducing a load balancer that will distribute incoming requests over these servers. Vertical scaling means adding more resources to a single server, such as processing power and memory, to increase that server’s capacity. If we look at the current Web user interface, both horizontal and vertical scaling can help to increase its capacity, but the effectiveness of each is limited.

In the paragraph regarding Memory Usage, it was already explained that the Web user interface stores a lot of state in memory, which is needed to keep the client and the server in sync. This means that, once a user has started a session with an instance of the Web user interface, all subsequent requests for that session must arrive at the same instance of the Web user interface. This severely limits the effectiveness of balancing the load between servers, because most of the requests cannot be balanced. If the sessions which were initially assigned to server #1 end up causing large amounts of load later, then they cannot be redistributed, and server #1 may start to fail.

The Indicium application tier will not keep track of any application state. At some point, we will need to keep track of resource state, for instance for inserting and editing records, or keeping track of process flows. This resource state, however, will be shared between instances of Indicium, to ensure that there is no client-server affinity. This might sound as if all requests will converge at some kind of resource state server, effectively moving the bottleneck from the Indicium servers to that state server, but that’s not the case. Most of the requests won’t need to access the resource state at all, and the simplicity of such a state server enables it to handle large amounts of load.

When considering vertical scaling, there is a less obvious advantage in either direction. With that said, the Indicium application tier should still have better vertical scaling, because it requires less memory and it maximizes the available processing power. When a request arrives at the Web user interface, one thread will handle that request and will be occupied for the entire duration of that request, even though a considerable part of that duration is spent waiting on a database server or a file server. Indicium on the other hand will release threads when they are waiting on something, meaning that threads spend all their time working. Since adding more processing power will not necessarily increase the number of threads or decrease the time spent waiting on a database server or a file server, Indicium will scale more effectively than the Web user interface when more processing power is added.