+1
Hello everyone! Today we have the new monthly status update for the universal GUI.
Like always, a demo environment of Universal on the Insights application is accessible here using your Thinkwise credentials as login.

With this update we’ve also released an alpha build so you can test it out for yourself. To aid (external) developers, we’ve created documentation for deploying, running and troubleshooting Universal. Be sure to keep the following in mind:

The breadcrumbs are finished! With the complete breadcrumb you always know where you are in the application.

We can divide the breadcrumb in three parts:

After sorting we now also support filtering on lookup translation values as we promised in the previous Universal post. It maybe seems like an obvious feature to an end user, but under the hood it may be quite sophisticated. It means we should order or filter the current data set based on data values from a related subject, possibly with some other related subjects in between: called lookup value resolvement.

From the end user’s point of view, this means (s)he gets the to see the expected filter results based on the values shown in the GUI, rather than their database values.

In our Insights application, the direct result of this feature is visible in e.g. “Employee->Hours”, filtered on an Activity like “boatmans”. The name of the Activity is selected from the Activity via another subject, as shown in the image below.

The name of the activity is fetched using an intermediate table.

Scroll to selected row after filtering

Scrolling to the selected row after filtering in the Grid.

When switching to another document and back, the vertical scroll position is now restored. This is implemented for the Cardlist, Grid and Form.

It's back from the past! We can apply the background image once again. For now we have one option available: we implemented this feature with a stretched background in mind. So smaller images won't look good because they will be stretched and become blurry, but other options are being considered as an setting in the SF.

We've added the ability to clear the cache when a severe error occurs. So when something really bad happens you can keep using Universal with a clean slate without needing to do anything technical. It looks like this: 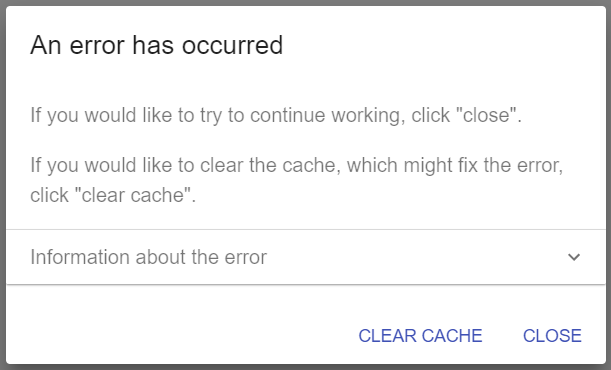 Styling
We noticed that the styling of Universal took an disproportional amount of time and resources to be applied in Universal. We figured out why this is and have made a design to remedy this. This will also make developing easier, but the most important part is that Universal will get a bit faster.

Editing and adding data
The moment we've all been waiting for. We're putting the finishing touches on the research and the plan to implement adding and editing data. This means that next month we can start work on building these features. Stay tuned for the next blog!

This resulted into two strategies:

#1: Translate an entire data set column at once with a single call to Indicium. We currently use this strategy.
#2: (new) Select the translation of a single data value directly from the lookup subject.
We need the second strategy right away for the new Breadcrumb component on a detail subject with an empty set. The breadcrumb shows the identity values of the parent subject to let the user know the path to the zoomed detail document. Possibly, these identity values should be translated into human readable values by using the lookup mechanism. In this case we have no data row to let Indicium know where to translate its values from. So right now these values are untranslated, and by implementing the second strategy they will also be translated.

Both strategies use the same caching mechanism, so each can use the data loaded and cached by the other one.

We keep putting an enormous amount of work in ensuring a high-quality product:


What we’ll be working on next month

Images are missing in this blogpost.