Hello everyone! The past weeks we've been working on making Universal much more responsive with a responsive toolbar and a responsive form. We also implemented showing messages.

Like with every blog, we've released an alpha build so you can test Universal out for yourself. Don't forget the documentation and be sure to keep the following in mind:
Download your alpha build here.

When the content from an Action and / or Filter component doesn't fit in its available space it gets pushed to the overflow:

Tasks and details in the overflow menu

Prefilters and their state in the overflow menu


Before content gets pushed to the overflow menu, the Action and Filter component tries to fit a much content as possible. This results in the following states for a tasks or details (CRUD actions and prefilters are always icons) ordered in maximum to minimum available space:

1. Button with icon and text:

4. Overflow (moved to the overflow menu): 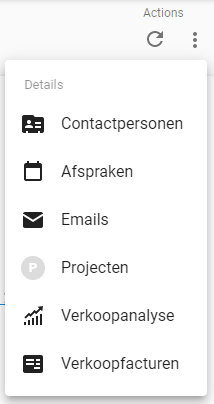 Collapsing into the overflow will happen from right to left. This collapsing will be done per group so tasks, details or prefilters will never be separated from their group. 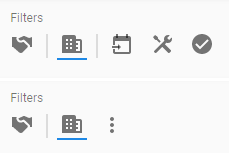 
The order of collapsing to the overflow is from right to left (in the future we want to use priority numbers to determine which items should stay the longest in the component).

Tasks collapsing to the overflow menu

Here, both sides are partially collapsed


"But I see white space?" Yes, this is because the task group would never fit with text and thus collapses to icons.

If the screen gets really small and all the items are collapsed the search field will also collapse to an icon. To perform a search the user has to click the icon that will show the search field in an overlay. If the overlay is closed but there is still a search active the search icon will be in the active state so the user can see that the results are filtered.

Searching on a mobile device

The work we've done is a huge improvement over what we had, but there still are some things we can do to further improve how toolbars behave.

The last item needs some more explanation. Right now you have all the prefilters, then all the tasks, etc. But this might not be the optimal solution. Imagine an invoice screen. You can generate invoices, approve invoices and send invoices to your customers. It might behoove us to have a bar that contains a prefilter that shows us all the invoices that have not been approved, and a task to approve them.

This approach would enable the developer to create and position their own toolbars. Grouping tasks, prefilters, reports, etc. by what they mean, not just by the fact that they are a task or prefilter. This is however not an easy feat, it is just an idea so it will take a while to accomplish.

Form with one column on a small screen

To show messages to the user we've implemented a snackbar component. Since you might not be familiar with the term, here's what it looks like:

An Indicium error message being shown in a Snackbar

With this we can show any kind of notification, be it from Universal itself, Indicium, messages the developer made, or anything else. We don't load all GUI message translations yet, but we do show some messages. More messages will be added later.

In the past three weeks we've added another 103 unit test cases to the components and inner workings of Universal. This brings us up to 1024 test cases in total.